Ahead of the LEN European Short Course Swimming Championships 2019 in Glasgow, we sat down with British hopefuls Luke Greenbank, Kayla van der Merwe and Freya Anderson to preview one of the final major meets ahead of Tokyo 2020.

Having won silver in the 4x100m Medley and narrowly missing out on two individual medals at the Commonwealth Games earlier in the year, the then-21-year-old would have been optimistic heading into the 2018 European Championships in Glasgow.

But after failing to reach the final in any of his three events – the 50m, 100m and 200m Backstroke – Greenbank knew something had to change.

He said: “It was a bit of a disappointing meet for me. I didn’t really perform nearly as well as I wanted to.

“After that, I sat down with my coach, Mel Marshall, and we said ‘what can we do differently?’ ‘Are there any steps we can take to ensure we make ourselves better from this?’

“It worked, just taking every aspect of training and seeing where we could improve. So I think looking back at what you’ve done is important.”

That reflection proved decisive for Greenbank, who travelled to the 2019 FINA World Championships in Gwangju with renewed confidence.

He left South Korea with three personal best times, which led to a bronze medal in the 200m Backstroke and a gold as part of the 4x100m Medley Relay team, which set a new British record.

As Greenbank continues to build momentum on the road to the 2020 Olympic Games in Tokyo, the European Short Course Championships will provide a further indicator of his progress.

He added: “The last time I was in Glasgow for the British Championships, I swam really well.

“I swam a one second PB. It’s a good pool and it’ll be a really good atmosphere with the home crowd, so I’m looking forward to it.

“It’s a big meet. I’ll be tapered, so to get some good times under my belt, some big swims, will build my confidence going into Tokyo.

Kayla van der Merwe will make her senior debut in Glasgow, after a breakthrough year on the international stage.

The Winchester City Penguins swimmer won the biggest title of her career at the European Junior Championships in Kazan, sealing the 100m Breaststroke title in a personal best time.

She followed that up with three new lifetime bests at the World Junior Championships in Budapest, winning silver in the 50m Breaststroke and bronze in the 100m Breaststroke.

That led to van der Merwe’s first ever call-up to the senior British squad and the 17-year-old is relishing the opportunity to make the step up.

She said: “To get a senior call up for the European Short Course Championships is really cool. I get to be on a senior team and have that experience.

“I did not expect it at all. It was quite surprising, but I’m happy because I get the chance to swim with seniors.

“I don’t have any expectations, I’m just going into it with an open mind and I’ll see what happens.

“I will just do what I usually do.”

Van der Merwe has already benefited from being around the British squad, soaking up advice from the more experienced members, including 2017 world champion Ben Proud.

The Swim England Swimming Talent Athlete of the Year said: “I learn a lot of skills from them. They help me a lot with my starts, because my starts aren’t great.

“But to have other people help you and give you tips is really helpful.

“Ben Proud helped me with my start when we were in Turkey. It was really helpful and really nice of him to help me.” 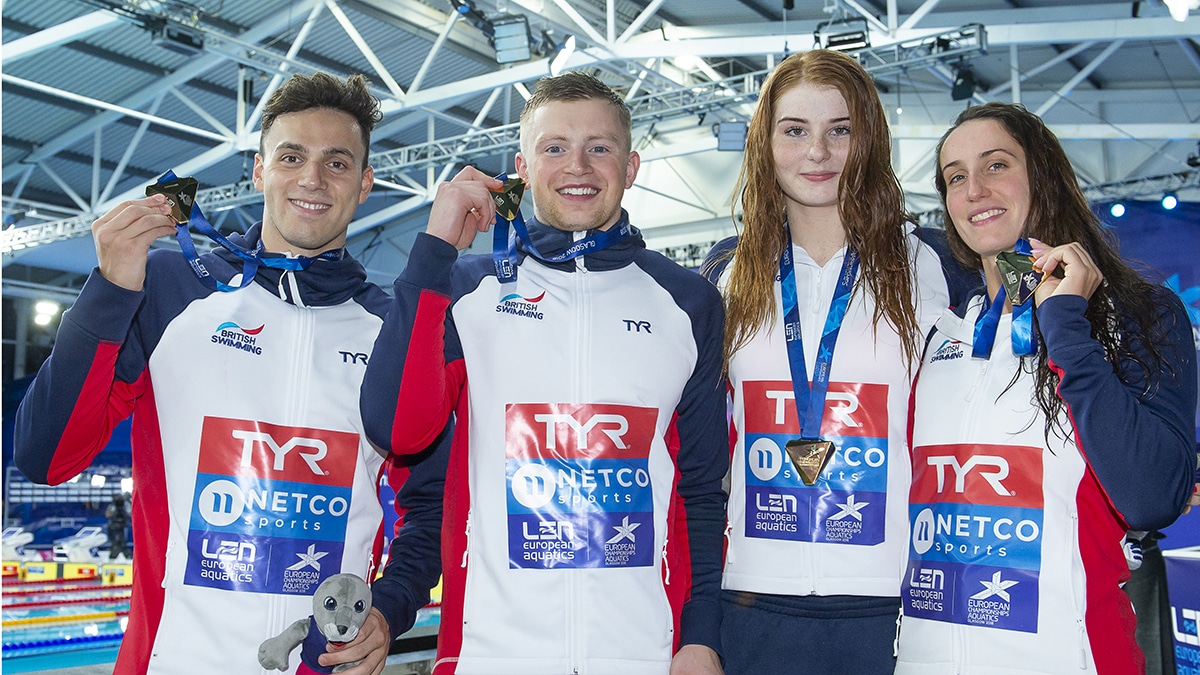 While the focus is on long course ahead of the Olympics, Freya Anderson is relishing the opportunity to compete in front of a home crowd and hone her skills against some of the continent’s best swimmers.

The Ellesmere College Titans swimmer has fond memories of competing at Tollcross, having won four medals – including two golds – at the 2018 European Championships.

She also won national titles in the 100m and 200m Freestyle at the 2019 British Championships.

Anderson said: “It’s a meet to go and see how I’m standing against the big girls and see how my skills can hold up – whether I’m tired or nervous against different competitors to what I’m used to.

“It’s a good stepping stone – if there is a pool and you can race in it, it’s a good thing.

“At Europeans last year, it was amazing having the home crowd and walking out hearing the roar was really good.

“In the relays, I was anchoring them all, so it was scary having that pressure, but once you touch the wall and realise you’ve won a medal for your team, it’s really rewarding.

“I still feel like one of the young ones [on the British team]. There are younger people coming onto the team and I think ‘that was me’, so I need to show them it’s OK to be nervous.”

All eyes on Glasgow

All the finals sessions from the championships will be streamed live across the BBC’s digital platforms, including BBC iPlayer, the BBC Sports app and the BBC Sports website.

British swimming CEO, Jack Buckner, said: “It’s great news that the BBC will be showing all of the finals sessions live for fans who can’t make it to Tollcross.

“With the Olympics getting ever more visible on the horizon, this will be a great opportunity for our swimmers to see where their form is at this point in the season.

“Taking on the best in Europe, I have no doubt the action will be both fast and exciting, as the UK once again plays host to another major international event.”

Brits' farewell message after 'craziest month' of his life

Brits' farewell message after 'craziest month' of his life

LIVE: Real out to extend lead at top of La Liga

‘You walked past me on the bus, shook my hand and congratulated me’